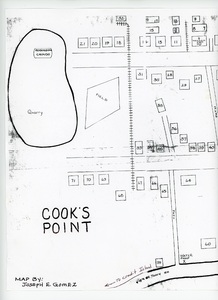 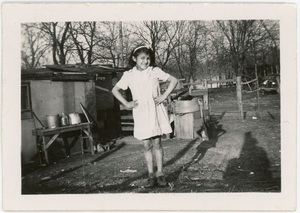 Otilia Gomez stands in front of her home in Cook's Point.  Buckets for carrying water are on the bench in front of the house, 1945. 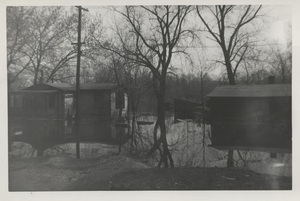 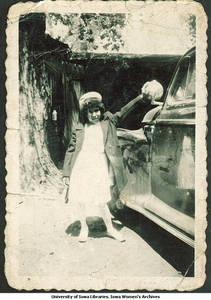 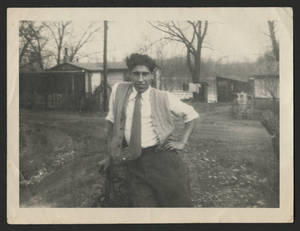 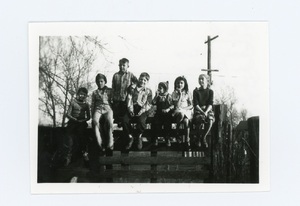 Cook's Point existed as a predominantly Mexican settlement from the 1910s until 1952. Its housing varied from a few small frame houses to a majority of makeshift shacks, boathouses, and railroad boxcars. Typical of many barrios across the Midwest, it lacked paved streets, sidewalks, electricity, running water, and sanitary facilities throughout its existence. "When it rained," remembered Esperanza Gomez, "people would have mud on them up to their knees."  The residents of Cook's Point owned the houses they built, but not the land, which belonged to Albert Uchtorff, a German immigrant. Residents paid one dollar a month for land rent and use of the communal water pump. The area flooded regularly and over the years a city dump grew up close to the entrance.

A sawmill had occupied the site in the late nineteenth century, which later developed as a shanty town for itinerant railroad and agricultural laborers who lived there during the winter months. Located within Davenport's city limits between Howell Street and Schmidt Road on the west side of town, the triangular shaped, two-acre site on the banks of the Mississippi River derived its name from its original landowner, Ebenezer Cook. By the 1910s, it had become a predominately Mexican settlement. When George T. Edson, a field reporter for the U. S. Department of Labor, surveyed Cook's Point in the 1920s, he found close to 100 Mexicans living there: "24 able-bodied men . . ., 17 wives, 6 grannies, 5 superannuated men and 44 children of all ages."

The few Mexicans who lived on the east side of Davenport, according to Edson's notes, lived in "aged and infirm buildings" and paid rents of $12 to $25 per month. He observed that they worked in the nearby town of Bettendorf as most Davenport factories  had "policies opposed to hiring Mexicans." Towards the center of town, a few Mexicans lived in boxcars by the railroad switch tracks at Leclaire and Fifth streets. But the majority lived in Cook's Point, just west of the Crescent railroad bridge that crossed the Mississippi.

In the 1930s, Antonia and Federico Lopez lived in a boathouse described by their son Salvador:

The first one we lived in was just a regular houseboat. I can remember the inside of it was made out of tin, tin inside - instead of plaster it was tin. And on the cold days I can remember looking up and seeing the tin and it was all full of frost up there. It was just like the inside of an icebox.

Because there was no running water in Cook's Point, children's chores often included carrying water from the two outside pumps that supplied the neighborhood.  The Lopez family kept water in a five-gallon crock for cooking and had a tin tub for bathing. When the water froze in the winter, they thawed it on the stove.  Neighbors maintained a small bonfire throughout the winter to prevent the outside pumps from freezing. In addition to carrying water, children helped tend garden plots. As Maria Aguilera explained:

I remember us working in the garden. We had a big old garden. That's how I learned to garden... I remember getting dirty. I remember my hands always dirty from the garden. .. We grew onions, radishes, lettuce, tomatoes, potatoes, cabbage. My dad knew all of that already.  That's how he would teach us. If you wanted to survive you had to plant your own garden. Mostly everybody at Cook's Point did have a little garden.

The children who grew up in "the Point," as it was called, served as interpreters for their parents; older daughters often stayed home from school to help care for younger siblings. In the summer, children played baseball and learned to swim in the quarry; in the winter, they went ice-skating on the river. Salvador Lopez remembers:

Sometimes, you know, ice skates are hard to come by.  Nobody had hardly any money back then.  So my next-door neighbor - that would be Ralph Vasquez - that would be Joe’s boy, why he found one skate and it just fit him.  But he didn’t find the other one.  So I had a pair of skates and so he said, “I’ll just use that one.”  And boy, he got better with one skate than I was with two.  He’d go like that.  I always bring that up with my brother.  He was better than all of us.  He’s the one that died in the war, World War II.

Many residents had fond memories of life in Cook's Point. Basilisa Herrera reflected, "We'd have dances, baptisms, funerals, if someone was sick everyone would go visit them. We all lived united. We would help one another." Residents often held these events in a room attached to the Mexican store owned by two brothers, Lorenzo and Miguel Hidalgo.

The population of Cook's Point continued to expand until by 1949, according to a survey conducted by St. Ambrose College students, 270 residents lived in 56 homes on the site. It existed until 1952 when the area was cleared for industrial development. Manuela García explained why she and many others had stayed so long:

In those days, if you had a penny, you wanted to hold onto it.  If you had two or three dollars you bought the necessities and held onto the rest of it because you didn't know when you were going to get another job or when you were going to get another dollar for that matter. (This quotation is from an interview recorded by Grace Nuñez for her MA Project, "Voices of a Different Color," University of Iowa, 1993)

Long after the barrio had been razed and the tight-knit community dispersed, former residents gathered each year to remember Cook's Point. Otilia Gomez de Savala and her brother Joseph E. Gomez wrote a song to preserve their memories of growing up in Davenport's Mexican barrio. 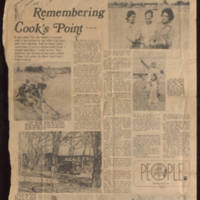 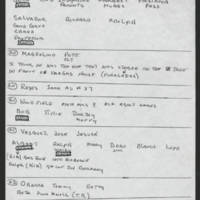 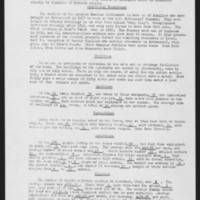 Cook's Point Economic Survey, conducted in 1949 by members of the Davenport League for Social Justice. 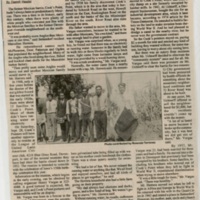 Article on Cook's Point written in 1996 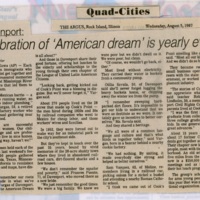 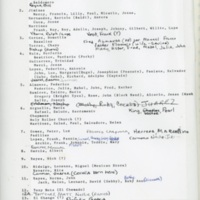 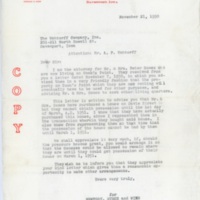