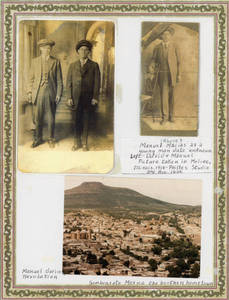 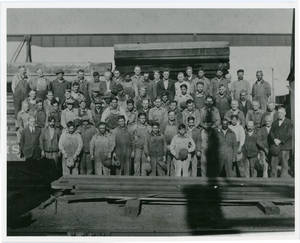 Photograph of some of the early Mexican immigrants who migrated to the Silvis yards to work in the Rock Island Railroad shops.  More than half of these Mexican men were recruited by the Macías brothers who taught them music. Some of them would bring their instruments to work and play for workers during their noon hour.  (Caption by Pete Macías) 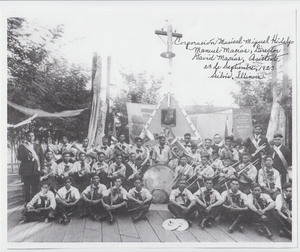 David and his brother Manuel Macías were born in the state of Zacatecas, a dry, rugged region of central Mexico. David hoped to become a priest, but the Mexican Revolution derailed his plans. Instead, he became a chemist for an American mining company with operations in Mexico. Business trips took him north of the border to Iowa, and soon he decided he would stay there permanently. One of the first Mexicans to settle in the Quad Cities, David arrived in Bettendorf, Iowa in 1914. He worked for the Bettendorf Car Company—a major supplier to the national railroad industry.

“[Bettendorf] was a booming town,” remembered Pete he Macías, Manuel’s son. “In those days, you go into a town and that town was belching with smoke…there was industry there.”

Manuel Macías, born in 1890, did not immediately accompany his brother to Bettendorf. Although he had also worked for a mining company, he joined the Mexican Revolution and, due to his musical background, played coronet in a unit band. When David wrote to him with news of opportunities in Bettendorf, Manuel and his wife Guadalupe decided to cross the border. He worked in sugar beet fields and on railroad crews as he made his way north, arrivingd in Bettendorf in 1915.

When the U.S. entered World War I in 1917, the need for soldiers abroad created a labor shortage across the country, including the Bettendorf Car Company. David and Manuel helped the company recruit Mexican workers to come to Bettendorf. On their arrival in Bettendorf, the workers lived in Holy City - the company housing close to the foundries where they worked.  After the war, many brought their families to Iowa. In 1918, David lost his left arm in an on-the-job accident in the Bettendorf foundry. Despite this, he continued to serve as an interpreter and advocate for Mexicans on both sides of the river in Silvis and Bettendorf. His nephew Pete Macías recalled:

My dad [Manuel] didn’t speak very good English, he spoke a very broken English. My uncle [David] spoke it very fluently and when they first came over here, when there was trouble, they’d get the consul from Chicago. He’d come down here and my uncle talked for him. My Uncle Dave was kind of going in between. He was kind of more or less in between the people that he helped a lot. He’d help his fellow countrymen, that’s what he was doing. There was no one else around here that would do it, but he spoke up for them and he was vocal, very vocal.

David and Manuel made regular trips to Silvis, Illinois, a town just ten miles and across the river from Bettendorf. Silvis was also home to a thriving Mexican community, and the brothers volunteered to teach music to community residents. “A lot of them had their families in Mexico, so they started getting in trouble,” recalls Pete, “so he [Manuel] decided to teach music. A lot of kids and men signed up and they formed a band…he asked for a rehearsal hall and they put a building up for the rehearsal hall.”

A few years later, the rehearsal hall became a church, named Our Lady of Guadalupe. David Macías built the church altar. Dedicated in 1927, the church served as not only a place of worship, but also as a community gathering point for Mexicans in Silvis and neighboring Quad City barrios.

The brothers lived out the rest of their lives in Bettendorf—David died in 1935, and Manuel, in 1954—and the communities they helped establish continue to thrive today. 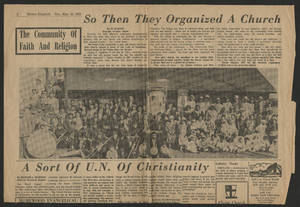 David and Manuel Macias led the formation of the Silvis, Illinois Mexican Community's first church in 1927. 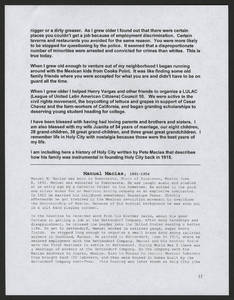 On page 15, 16, and 17 of his memoir "Rodriguez Family of Holy City Bettendorf Family Genealogy and History," Ernest Rodriguez recalls the history of David and Manuel Macias. 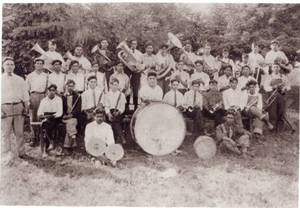 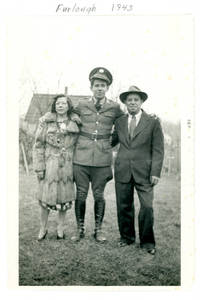 Guadalupe and Manuel Macías with their son Rudy during his military leave, Davenport, 1943.