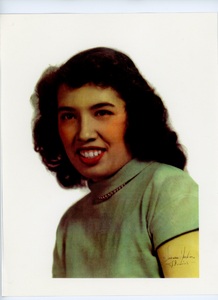 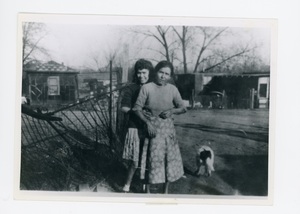 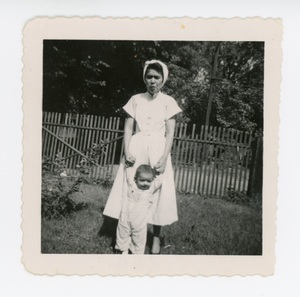 The youngest of six children, Lucy Juarez was born on a farm in Pemberton, Minnesota. Her parents, Sara and José Juarez, had met and married in Chihuahua, Mexico.  José had served as a treasurer in Pancho Villa’s army, but he and Sara left Mexico during the Mexican Revolution. Crossing the border at El Paso, Texas, they lived in New Mexico, Nebraska, and Minnesota, before settling permanently in Cook’s Point, a Mexican barrio in Davenport, Iowa, in 1931.

While Lucy’s father and brothers worked at local factories, Lucy and her sister stayed home to help their mother manage the household. Without running water or electricity, chores were difficult. Lucy carried water from the local pump to wash clothes on the washboard, and canned vegetables from her mother’s garden.  To help make ends meet, Lucy and her family would work in the Pleasant Valley onion fields. “It was hard work,” she remembered. “We’d get picked up, a truck would pick up everybody and take them out to the field, then take them back to Cook’s Point.”

In 1949, Lucy eloped with Henry Vargas, the brother of her best friend.“[My father] liked Henry because he was a hard-working man,” Lucy said, “and he would never have to worry about his daughter going hungry.” When Cook’s Point closed in 1952, the couple rented a duplex; in 1963, they purchased a home in a white neighborhood. “I had neighbors come over here and ask me, ‘Oh, we hear that you’re a family with fourteen kids?’ . . . I says, ‘No, there’s seven, but they make enough noise for fourteen.’”

Lucy’s children were the only Latino students at their elementary school, and Lucy believed that the Anglo families felt superior to them. At PTA meetings, she remembered, “I felt very unwelcome. So I didn’t go anymore.”

These experiences strengthened Lucy's belief in the importance of community activism and political justice. She became an active member of LULAC Council 10.   “What’s always kept me involved with LULAC [was] education,” she remembered. She helped organize a variety of fundraising events, from taco dinners and seasonal dances to rummage sales and bake sales. The money earned from such events helped fund college scholarships for local students. “I was always in the kitchen, raising money,” she remembered. “I always helped that way.”

Along with many other LULAC members, Lucy helped bring the national grape boycott to the Quad Cities by picketing local stores and speaking out on behalf of agricultural laborers. In 2003, when her daughter Rita Vargas was elected Scott County Recorder, becoming the first Hispanic to hold an elected office in Iowa, Lucy walked the neighborhoods and knocked on doors to support her campaign.

No matter what, Lucy Vargas always voted. “It was a privilege to be able to do that,” she said, “to be able to go and vote for somebody that you thought would do good for the country or for your community.” 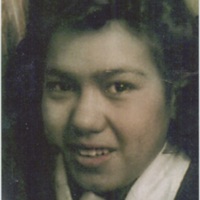