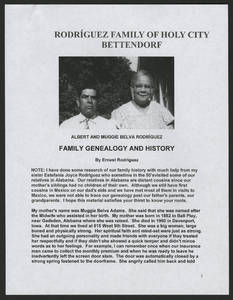 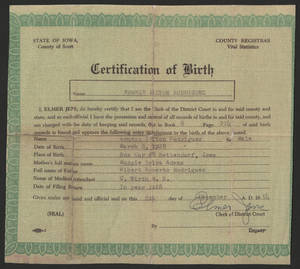 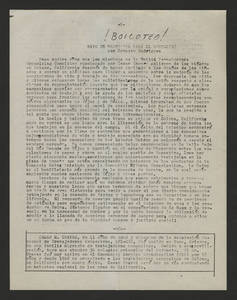 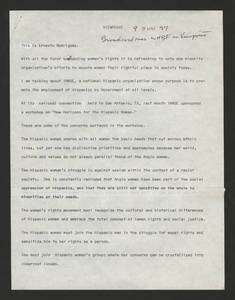 Rodriguez broadcasted regularly over WHBF "Viewpoint." Here he discusses the double discrimination of race and gender that Latina women confront, 1977. 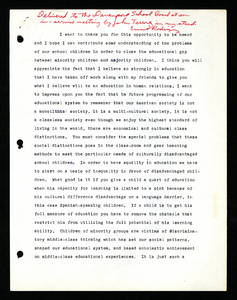 Speech to the Davenport School Board, by Ernest Rodriguez, advocating the need for bilingual teachers in local schools.

Ernest Rodriguez grew up to be a civil rights leader and worked for change in his community throughout his life. He was born in boxcar #8 in Bettendorf, Iowa. The boxcar was in Holy City, the predominantly Mexican barrio where Ernest and his siblings grew up during the 1920s and the Great Depression.  His father, Norberto Rodriguez, had migrated to the United States from Mexico in 1910, and settled in Bettendorf in the 1920s where he worked as a chipper in the Zimmerman foundry.  His mother, Muggie Adams Rodriguez, managed the household and raised the children. When the settlement was demolished in the late 1930s to make room for development, Ernest’s family relocated to Davenport, Iowa.

His early education and upbringing laid the groundwork for his future activism. “I don’t know what grade I was in,” Ernest recalled, “but our class was taken downtown and the mayor spoke to us. And he said, ‘Well, any one of you can aspire to be president of the United States.’ …in the back of my mind, I kind of thought, well, anything I can do to make things better? I was gonna do it.”

During and after high school, Ernest worked at different factories and foundries in the Quad Cities to help support his family. One summer, he loaded chickens onto trucks at the Davenport Produce plant. Another year, he bundeled wire at the Nichols Wire & Aluminum Company in Davenport. He briefly worked at International Harvester’s Farmall tractor factory in Rock Island, but the work was strenuous, and Ernest only stayed three days. He later spent four years at the J. I. Case Company foundry, also in Rock Island, and was drafted into the Army in 1951.

When Ernest came back from the service, he went to work at J.I. Case in Bettendorf, Iowa, and later started working at the Oscar Mayer packinghouse in Davenport.

I went to work on the kill floor...they walk you through and show you where you’re going to work. I thought, gee, all that blood up on that cutting floor, a lot of blood around everywhere. I thought, I’ll never stay here. I stayed eleven years! And that was hard work, too . . . . Where we lived, you could sometimes smell those hogs. They would bring them in trucks and they would keep them in a holding area and then they’d run them up these chutes. When they’d get in the chutes up in the plant there, they would gas them and stick them and kill them.

In the 1950s, Ernest joined the Scott County Young Democrats.  In 1959, he became a founding member of LULAC (League of United Latin American Citizens) Council #10 in Davenport.

Between his work with LULAC and his increasing activity with his union - the Amalgamated Meat Cutters & Butcher Workmen (AMCBW) - Ernest was fast becoming politically active and an advocate for civil rights.  When the AMCBW asked him to organize a union at the Louis Rich turkey plant in West Liberty, Iowa, he took up the challenge. “It was a hard nut to crack,” he remembered. Although the West Liberty workers eventually voted against a union, he “learned a little bit about organizing” along the way.

Between 1968 and 1970, Ernest served on the Davenport Human Relations Commission as a representative of LULAC Council 10.  In that capacity, he advocated for the importance of having a paid, full-time director to the commission and worked to improve police-community relations.  Like others, Ernest believed the work of the commission had been hampered by the lack of a director, noting, “We are nibbling at problems we should be taking big bites out of.” After a protracted struggle, the Davenport City Council hired NAACP president Bill Cribbs as its first paid, full-time HRC director in 1970.

On the issue of discrimination in education, Rodriguez brought his concerns directly to the Davenport School Board.  He argued that the children of minority groups were victims of “discriminatory middle-class thinking” in a system that perpetuated low achievement among disadvantaged children.  Most of all, he challenged the school board to ask its teachers to “lift the veil of whatever obscures your vision and look beyond the purely superficial appearance, look into our hearts, look into our minds, read about us, know us, understand us.”

During the late 1960s Ernest Rodriguez joined other members of LULAC Council 10 to form the Quad City Grape Boycott Committee to support agricultural laborers in California in their struggle to improve their wages and working conditions:

It was grapes that they were boycotting at the time. We recruited people and got the unions to support us. We went out and picketed various stores around here that we knew were selling the grapes to try to get them to quit selling them. That went on for quite a while…And then John [Terronez] was really persuasive. He got Cesar Chavez to come in and appear at the Eagles Hall. We had a big rally there….it was an emotional experience. Cesar was the greatest.

In 1970, Rodriguez left Oscar Mayer to fill a full-time position in Davenport as director of the newly created Area Board for Migrants, funded jointly by the dioceses of Davenport, Peoria, and Rockford. In that position, Rodriguez initiated an immigration counseling service and successfully fought for a bill proposing an Iowa Spanish speaking task force.  The report compiled by members of the task force led to the creation of the Iowa Spanish Speaking Peoples Commission, the forerunner of the Iowa Commission on Latino Affairs. 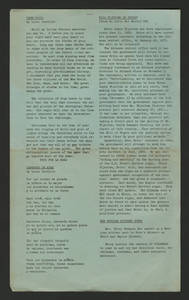 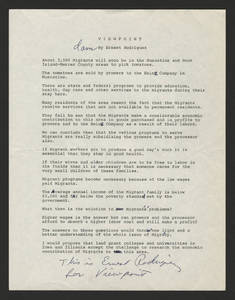 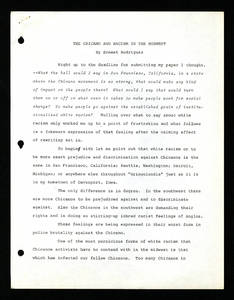 "The Chicano and Racism in the Midwest" by Ernest Rodriguez 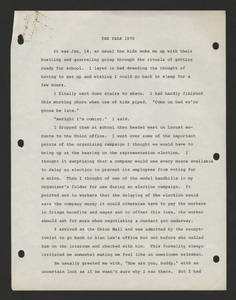 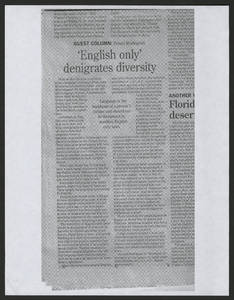 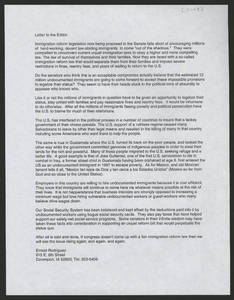 Letter to the Editor from Ernest Rodriguez, 2007 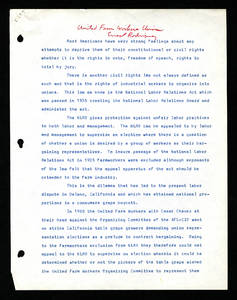 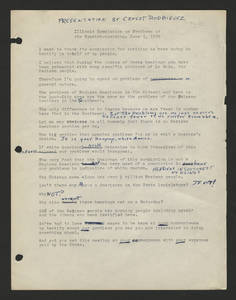 Ernest Rodriguez presents at the Illinois Commission on Problems of Spanish-speaking, June 5, 1970 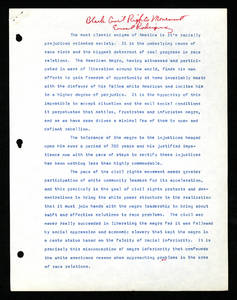 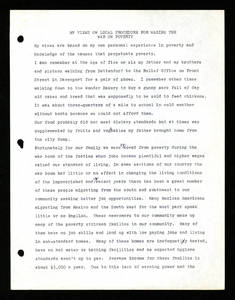 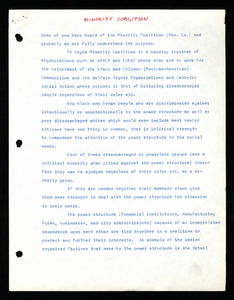 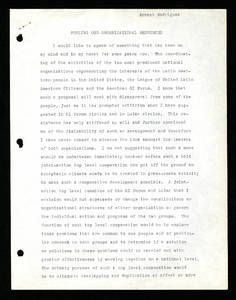 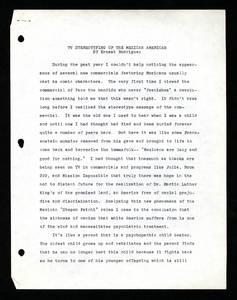 "TV Stereotyping of the Mexican American" by Ernest Rodriguez 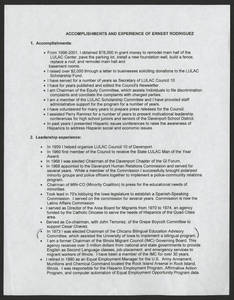 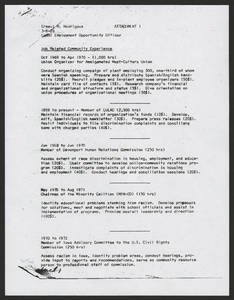 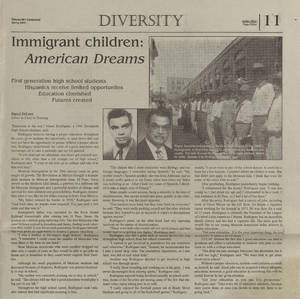